How to Host a Mad, Mad March Madness Party in Your DC Apartment

March is finally here! And with it, college basketball’s most celebrated, most watched, and most gripping event—March Madness, that month-long contest during which 68 of

college basketball’s best teams compete for the most coveted prize in the league, with college players hoping to catch notice from NBA recruiters.

If you’re one of the many fans who’s planning on hosting a bash for friends and family, you’d do well to plan ahead of time and start brainstorming some March Madness party ideas. Since we don’t want your party to go down as an epic fail, we’ve compiled a step-by-step guide to hosting a riotous March Madness gathering in your luxury apartment in Washington DC.

You can’t plan a party without knowing when it will take place. Check the official NCAA schedules to get a general sense of when the major tournament milestones occur. Every year, the games kick off with the First Four in mid-March and run all month long, until the Final Four in early April. Decide whether you want to throw a one-off event or host a rolling, rollicking week-long affair.

If you’re rooting for a specific team, wait until they make their way through the tournament, and be sure to stay up to date on their upcoming games. Even if you don’t have a horse in the race, it’s good to know who’s playing on what day and set the betting ledgers accordingly. In that case, you’ll probably want to plan your party around the Final Four—the climax to the whole month-long extravaganza.

They call it March Madness for a reason. There’s nothing like a good tournament to send die-hard fans into a frenzy. Keep that in mind when you’re creating a guest list. Start 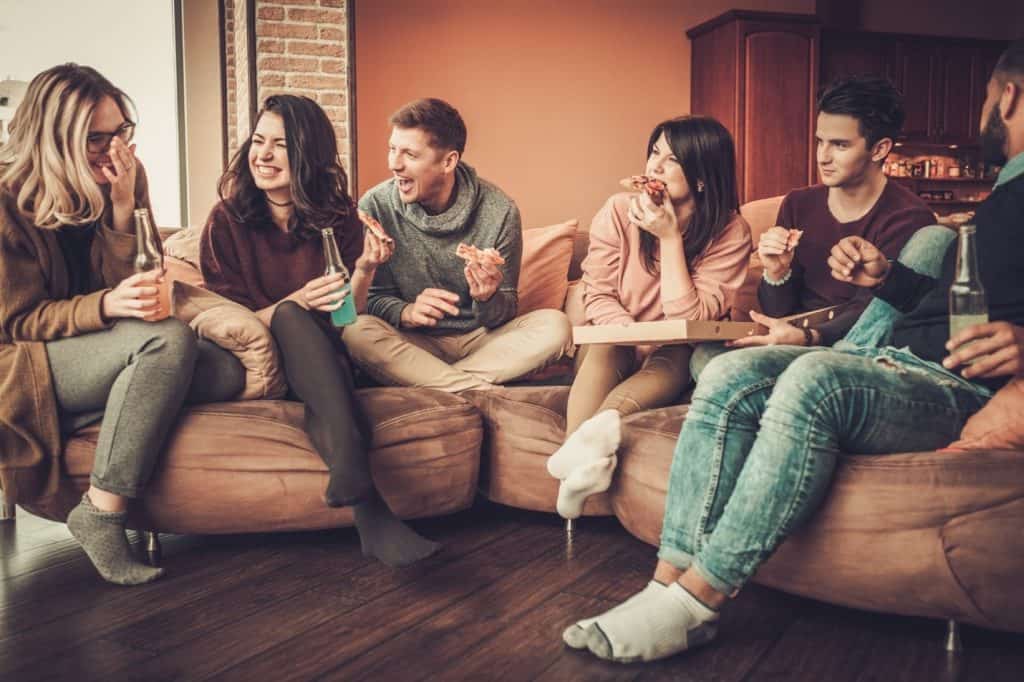 with your basketball-loving friends, then move on to the general sports fans. That will ensure that you get the right people—the ones who can follow the game and take part the spirit of March Madness.

If you still have room, expand the list to include anyone else who might add to the fun and excitement. Even if you’re not a basketball devotee; even if you’re just looking for an excuse to throw a party, it’s nice to have people around who can explain the game, thrill in the triumphs, and weep at the defeats. While you’re at it, March Madness might be a great time to catch up with old hometown friends or college chums.

March Madness parties are informal affairs, and the invitations should reflect that reality. You could send notes by snail mail, but a Facebook or email invite might be more appropriate. If you do want to go the extra mile with real cards or flyers, consider putting a little thought into it. That could be anything from cards in the color of your favorite team to basketball-shaped flyers.

Whether you decorate or not is up to you. March Madness isn’t Halloween or Christmas, so it’s not necessary to go all-out, but a little embellishment here and there can add to the festivities. Place mini basketball hoops around the room, invest in a few streamers, and throw up some jerseys. If you’re not in love with any one team, stick to orange and black, which seem to have gained traction as the unofficial colors of March Madness.

It might not be a full-on dinner party, but your guests are definitely going to want to nosh on something during the evening. You should start thinking now about what you 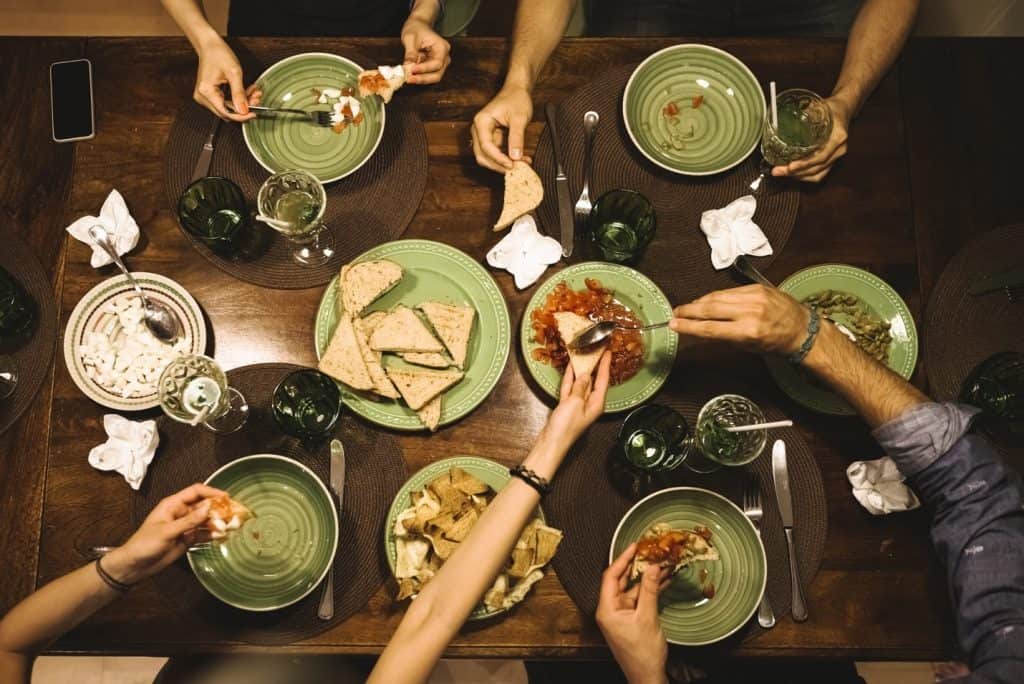 If you’re the type who loves to spend hours dreaming up creative culinary treats, then consider whipping up some miniature chili bowls, homemade French fries, sliders, coconut shrimp hors-d’oeuvres, or anything else that catches your fancy. When it comes to March madness party food, pretty much anything goes, as long as it makes your tummy happy.

If you don’t want to spend all week in the kitchen, consider hosting a potluck. Make one or two dishes, and then have your guests bring their own fare. Don’t forget about the drinks. A viewing party without some beers and maybe even some cocktails is a bit like a birthday party without presents. Epic fail.

Never forget that the game is the main event. No matter how scrumptious the food or how awesome the decorations, nothing will distract your guests if they can’t see or hear the game. Before anyone sets foot in your apartment, configure your TV so it’s ready for game day. That means checking the sound, tweaking the picture, and absolutely making sure everything is in working order. 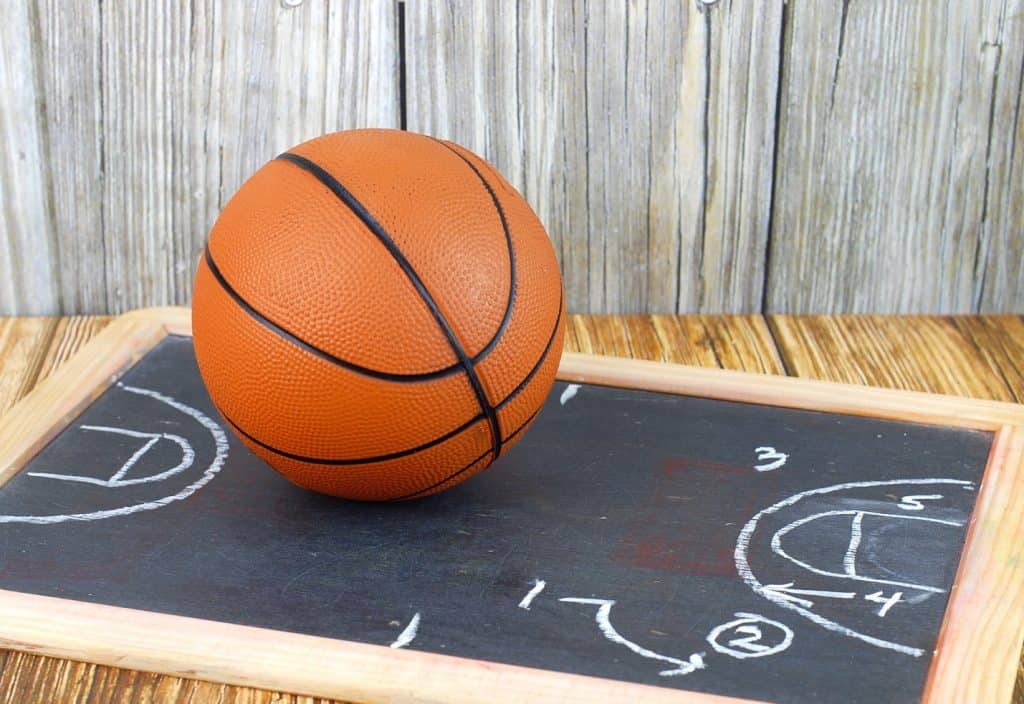 For the most part, you and your guests will be glued to the television, watching your favorite teams compete for the championship, but there’s no reason you can’t kick it up a notch with a few games. Stick to short, easy diversions you can play during commercial breaks.

Have guests vote on their favorite commercial or write down their favorite sportscaster cliché on Post-its and stick them to the wall. Since shoes also play such a big role in basketball culture, you could ask guests to wear their most awesome (or their most outrageous) sneakers.

Of course, the betting will take up everyone’s attention, and you might want to take some time to set up brackets, but that shouldn’t stop you from throwing in a few extra diversions for good measure.

Don’t leave the seating to the last minute. In fact, if you plan only one thing in advance, make sure it’s the seating. Your guests can bring food, drinks, and a lively spirit, but they’re not going to bring their own chairs and sofas. You don’t necessarily need to provide a seat for every guest to sit all the time, but you will need to offer enough to make them comfortable when they need it.

If you do need extra seating, grab some bean bag chairs or fold-up chairs. If you’re on good terms with your neighbors (and if you’ve invited them to the party), then ask them if they could lend you an armchair or a loveseat. While you’re at it, throw in a few extra pillows here and there for comfort.

No matter what happens, you’ll have plenty of cleanup to do after the party’s over. You’ll have to throw away the trash, vacuum the floors, wipe down the tables, and maybe 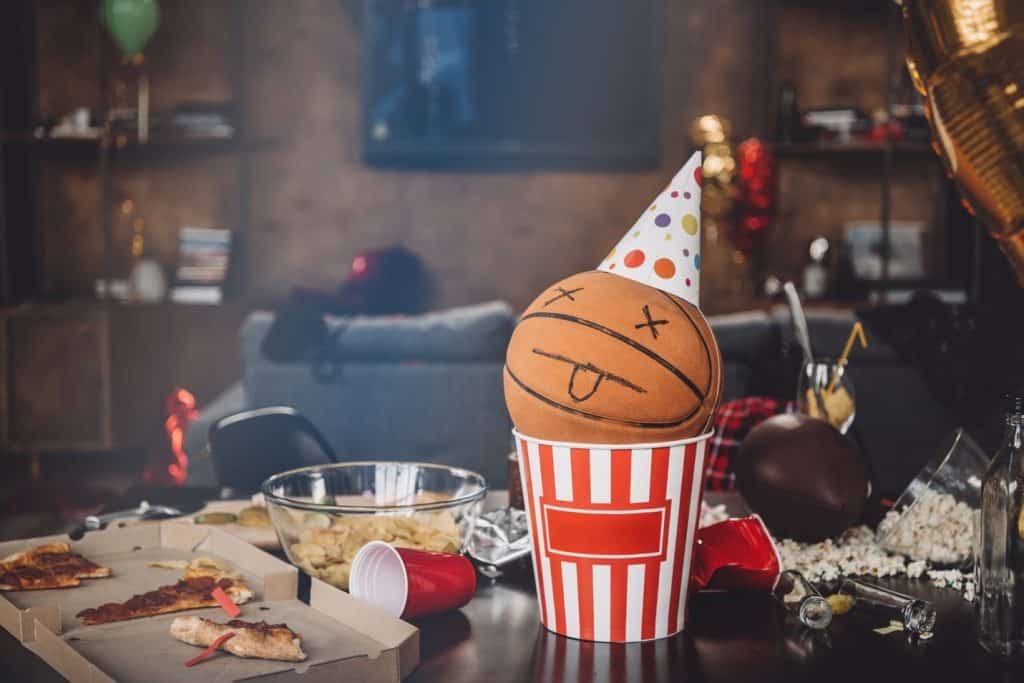 even rearrange the furniture. That’s just the name of the game—but permanent damage isn’t. The last thing you need after the rush of March Madness is a hefty cleaning, repair, or replacement bill.

Do what you can to protect your valuables, and that includes your furniture. Put expensive items away before your guests arrive. Consider slipcovers for the sofa and any nice chairs. Have plenty of coasters at the ready, as well as extra towels for emergencies. Oh, and it’s never a bad idea to place some additional trash cans here and there so guests won’t be tempted to chuck their cups and napkins on the floor or leave them on tables.